Team Sparta at the Sandstone Challenge 2013

Around the circus tent, onward towards Frodsham Community Centre. Nothing left, but maybe 20 metres. All pain is forgotten and I summon up enough energy to dance across the finish like a well-oiled droid. Too much energy left? No chance. This was the one where everything was given. 33 miles of tough terrain in 5hrs 33mins. 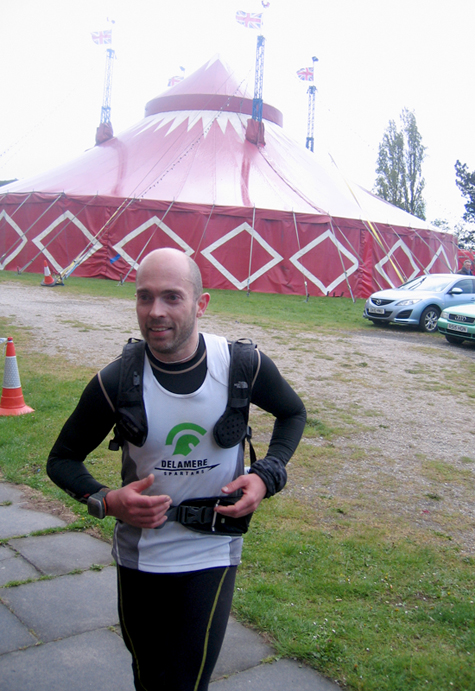 11th place. First emotion: gutted. “Is that not good enough?” says the marshal. “Well, yeah, but tenth would have been better”. It’s an arbitrary number but one that everyone connects with. Since I started running about three years ago it became a primary goal, however unlikely, to finish top 10 in a race (any race). It wasn’t to be. Faux tears followed as I explained the situation to Wallman.

Seems I have a number 11 hoodoo. My one attempt at cross country in school, probably my single reasonable effort in sport below the age of 30, bagged me eleventh place. I’d also managed the same position in a 10k in Cartmel a few months before Zeus created Sparta. The Sandstone Challenge, such a special race for the Spartans looked like it could be the one…

Late on in the race I came across a guy walking his dog -  “keep going, you’re in ninth”. I could hardly believe it. He was in fact wrong but it made me run three of the last four miles like I was being chased by the grim reaper. With just a mile to go, calf cramp returned. This time, it really meant business. Something the shape of a small egg popped out of my calf and made me yelp as though Grim’s scythe had finally pierced my spine. I knew that the last mile would be straight-legged tippie-toe, character building running.

I didn’t know how long I could hold off the guys behind me, but it wasn’t the guy I’d expected who caught me, seems my late turbo at Manley common had successfully dropped him. It was fellow Spartan, Tom. He was looking fresh and deserved to overtake. I carried the pain to the finish line, thinking I’d secured tenth place, plans now hatching of how I could now finally retire to a beach.

It wasn’t to be, but hey, eleventh is not so bad. It’s tantalising. It keeps me wanting more and that’s what I really want. In hindsight I’m ecstatic with eleventh and the fact that I took nearly half an hour off my PB. Eleven is definitely my lucky number just as green has become my favourite colour these days.

I still don’t know if my plan to pace myself would have gained me a better time. It was pretty much scuppered on the coach down when Alex pointed out that going out fast is “time in the bank”. I went with his strategy and it worked for the first 22 miles. Unlike last year, I felt really good, so I gave it all I had. Calve cramp kicked in at this point: way too early. It really slowed me down for the next four miles. It was either rehydration salts or the gang of Spartans at Barnesbridge Gate that revived me. Either way I was gifted another 6 cramp-free miles. 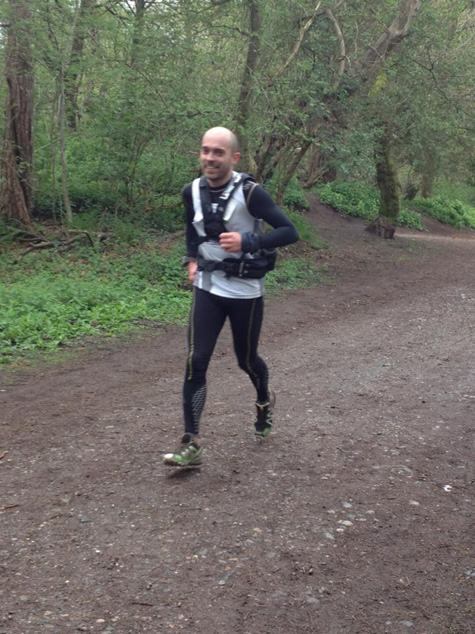 Despite being certain I gave 100% effort, I’m convinced I can improve upon my time. This will largely be down to training and conditioning so that my calves get used to the abuse. Following the race, it occurred to me, never once did I think, “why am I doing this?” I guess I’ve now done this sort of thing enough times to know why. If you haven’t tried pushing yourself to the limit then you can’t really ever know “why”. As with much in life, enlightenment doesn’t come without a little effort.

It was a very different race to what I imagine the Lakeland 50 will be. If I go out at the pace I went on Saturday I will undoubtedly cause myself some significant problems. I actually changed my perspective on the 50 on the way round. I’m now looking forward to the experience and I don’t feel any pressure. I’m looking forward to enjoying running 50 miles even if I’m not one of the first Spartans home. Does that make it a ‘B race’?

Probably the best aspect of Saturday was experiencing the incredible Spirit of Sparta. Our post-race party cemented lasting friendships and the team ethic that is so much a part of the Spartan ethos. This is becoming a habit. So many Spartans pushed themselves harder, physically and mentally, than ever before. Harder than they ever thought they could. About thirty of our club members signed up for this race and every one of us completed it. Seeing Alan had successfully honoured the memory of his daughter was special moment too. Over £1000 raised for charity. Massive strength of character required when he was clearly unwell but not about to give up.

There were so many humbling achievements. A Spartan one, two. Eight in the top 20. Gareth consumed 14 gels ‘For Sparta’. Nick eviscerated the demons of last year to romp home in ninth place with head injuries. I bet the tree came off worse.

So, if you’re reading this a year on from now, considering taking up the challenge. Do it. Do the training and take it seriously, it’s not a walk in the park (even if you choose to walk it). One thing’s for certain, you can do it if you put in the effort and give it the respect it deserves. You will then become one of the few privileged people to know “why”.

Thanks to Andy Robinson & Helsby RC, The Scouts who served much needed tea, the physio who sorted my calves and of course Team Sparta in all capacities of the day.