SST 2013: Headgear can be hazardous to your health

I am lying on my back on the forest floor. All that is missing is a circle of tweeting birds spinning above my head like a Loony Tunes cartoon. As I get back onto my feet, I look behind me for the first time in 5 hours, hoping not to see approaching hordes of runners, ready to speed past me so close to the finish.

Its ironic isn’t it? I had Jason and Paul L to stay the night before the race, both a good 6 inches taller than me. I reflected on this as I sat in the minor injuries unit at the Infirmary, waiting for a blob of superglue to mend the hole in my head. How come two giants managed to avoid the obvious low branch in Frodsham Wood and not me? For the answer, I refer you back to the danger warning I posted about myself in my last blog. Unsighted by my peak cap, that’s my excuse anyway!

It was a day for comparisons to last year. I was pretty relaxed, the only race goal I would admit to was a desire to beat my maiden effort, which I knew would not be too hard, given my pre race condition last year.

This year, the SST became a race event for me, in stark contrast to last year when I was happy to make it to the finish, every step through Frodsham Woods inducing full on leg cramps. The prospect of carrying enough leg speed to actually hit a tree and be pole-axed would have been physically impossible, so knocking myself senseless in the dash for top ten personal glory is real progress!

Rewind back to the car park earlier in the day in Whitchurch. I found myself stood next to Dave at the front of the pack as we waited, the gleam in his eye giving away his intent to pull the pin and give it full throttle. Erm, is this wise, the only tactic I had decided to adopt today was a steady pace start. Ah well, go with the flow Nick.

After a pacey first 3 miles, the rest of the journey was hugely enjoyable, running a pace that felt good and eating as many Jaffa Cakes as I could manage at each stop. At Rock Farm I babbled happily to the lovely checkpoint people, where last year I had dissolved in a mini meltdown. You’re 6th I was told. Woohoo; off I bounded up the hill to Summertrees, the track that took me nearly 20 minutes to stagger up last year.

Nothing else significant to report, other than almost being run over by my wife as she was hastily exiting BBG carpark trying to track me down, so fast forward back to Frodsham Woods, having just been passed by two guys that I hadn’t seen since we chatted around Beeston.

No worries, 8th is immense I thought. SMACK!

With no sign of immediate danger of being caught, I squinted through a last dark mile to the finish, looking like an extra from Dawn of the Dead.

My eldest daughter Isabella was the first face I saw as I emerged from the last alleyway before the Community Centre, waiting to greet me home. Luckily my stupid grinning face distracted her from my physical appearance and she legged it off to announce my arrival to the rest of the family at the finish line. 8th has mysteriously become 9th, some poor maths at previous checkpoints methinks. 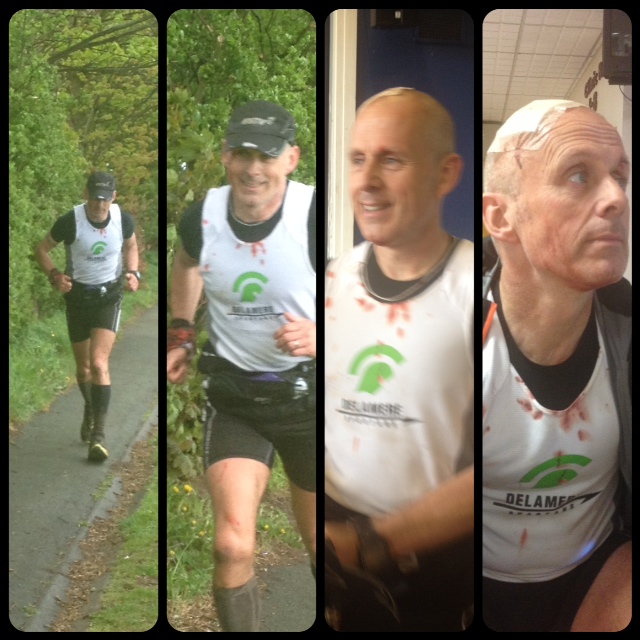 One grateful patch up job later and I demolished pie, peas and gravy, impeccably delivered by the helpful Scouts on duty. Cheers!

What a brilliant day of inspiration, great performances all round and the buzz from everyone after the race was awesome.

Now it’s just 71 days and counting until the Lakeland 50. With the SST ultra under the belt, it’s time to head for some bigger hills now.