So, after Christmas, training began in earnest, and was going really well.  Fartlek, distance, trail running and core body work.  All was good, until I pulled a muscle badly enough to stop me running for the whole of February.  My physio said that I would just about make it round, slightly despairingly.  I knew I'd make it round.  I was underprepared, and consequently, any ideas of a time had to go, but as Shaun (my fellow Spartan who won the other ballot place) and I were running for the Walton Neuro Fund, a charity close to both of our hearts, I knew I'd make it.  So many people had sponsored me for what I was about to do, that I had to finish.  And whilst I could walk the last few miles, if I was struggling, I'm stubborn as a mule, and was going to do it.  Besides, Spartans Never Surrender.

A Race of Two Halves

On the starting line, I felt strong.  Excited, soaking up the atmosphere, ready for anything.  The niggle in my shin had vanished (adrenaline, and the shin splints returned after finishing), and I was off at a comfortable 9 minute mile pace.  My long suffering family were out to see me at mile 9, with the Spartan flag.  It was Jessica's birthday; I'd obtained permission to hijack her big day before I entered the ballot.  A yell of "Sparta!" and I was past.  I waved to people cheering, I clapped the bands that were playing along the route.  I stuck to my 9 minute mile pace, soaked up the atmosphere, and loved the whole occasion of it all.

The London Marathon is a truly unique event - a coming together of a nation to watch a mass participation event.  The cameraderie between runners and the support from the crowd was different to any other event I've taken part in.  It's also really loud.  26.2 miles of lots of people yelling at you, at top volume.

Things were going really well until past Tower Bridge, at mile 13ish.

I'd been running with the Runners' World pacers until this point, and here I lost them in the crush round a corner.  That was when the heat and lack of training began to take their toll.  It was a very hot day, and although I was hydrating every mile, and taking on gels every 6 miles, I was flagging.  The one thing I wasn't prepared for was sunbeurn, and I was very red the next day.  The last 6 miles were an exercise in will power.  I broke it down at mile 20 to no more than a run from home to Whitegate Station and back, a pleasant jaunt on the Whitegate Way that ordinarily wouldn't have seen me struggle.  Slowly, the miles were eaten up.  Eventually, I was very slow, but I was still running.  My name was on my race shirt, and people kept yelling at me that I was looking strong.  They were kind and well intentioned, but liars, one and all - I've seen the photos!   Coming into Westminister, past Big Ben was a heady mix of feelings.  Exhaustion, elation, and euphoria, all mingled together.  I heard my sister in law, Emma shout my name as I went past, but didn't register it was her at the time.  I'd been passed by a lot of people by this point, but I was determined to give it a sprint finish.  Passing Buckingham Palace at a sprint was wonderfuland I finished in 4 hours and 24 minutes.  I nearly collapsed as I crossed the line and a marshal came to ask if I was ok.  Quite a few runners needed attention at that point.  I was determined not to be one of them. 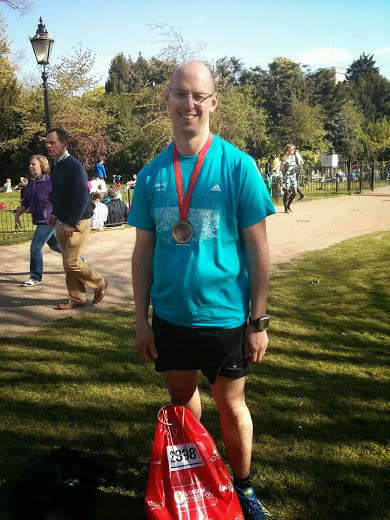 I kept my medal on for the rest of the day - I was glad I did, I got my tea for half price in Covent Garden because I was wearing it!  The atmosphere in London that day was incredible - I was high fived by random strangers, I made new friends on the Tube (always an interesting experience) and I felt like a winner, despite my slight disappointment with my time.

Am I disappointed with the race?  Yes, I'd have liked to have a sub 4 hour time, but the Virgin London Marathon was a running bucket list event for me - I'd really wanted to do it for a few years.  I loved the whole experience, the training, the Expo, the race, the atmosphere, the friendliness and the support, not just on the day, but from everyone I know who sposnored me, who put up with me obsessing about it, and who asked afterwards.  Ultimately, I loved being a very small part of something so big.

I won't do the London Marathon again, it was too noisy, and ultimately, I'm not a fan of running in a city, but I will be back for another marathon, I just don't know when. I've raced every distance from 5k to ultra marathon, and have almost  ticked off everything on my running bucket list.  Just need to get a bit faster now...