Only 14 weeks since the establishment of the Delamere Spartans, yet the Spirit of Sparta once again rears its head, as Hackos and The Finisher took on the fabled Tough Guy’ race in Perton. Dubbed the ‘Safest yet Most Dangerous event in the world’; Tough Guy was THE race to put The Spartans through their paces. Excitement and anticipation of the unknown, fueled these two hardy Spartans in their preparations. From the ‘Tough Guy’ trailers and videos on YouTube it was apparent that extensive cardio, underpinned by a real core ‘total body’ strength would be required. Both Spartans achieved this in the lead up, or so they said!! An overnight stay was the order of the day to ensure that the Spartans were ready to meet the Persian test, fresh and having had a good nights sleep. A hearty meal was indulged in by both, the night before; meatballs and ‘The Chicago Grinder’ (don’t ask). 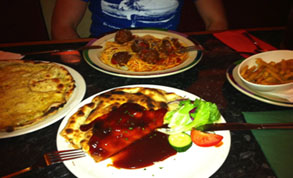 Perhaps some guidance on pre race nutrition is required for these two. However the chips , I am told, tasted GREAT!!

This was followed by a mix up at the ‘5 star’ Holiday Inn where an apparent mistake on Hackos’ booking meant that the twin room had suddenly become only a Double. Unfortunately due to a high demand of ‘Tough Guy’ rooms that evening, options were not available for our intrepid Spartan Heroes.

Therefore, as you will now understand and undoubtedly follow if the same experience befalls you, our fellow Spartans ‘bit the bullet’ and upheld the loyalty and closeness that all Spartans share! (There were a few glances at check out but the wives were not concerned )

An early rise (easy now!) meant a focused approach to breakfast and preparation to the day. Not even the presence of the 118 118 duo put these Spartans off their scrambled eggs and chipolata sausage. However when told by a ‘cockney geezer’ that a Sunday morning check in meant an hour and a half queue; the move towards urgency was subtle yet apparent. As predicted though, he was sharing one of the numerous ‘Tough Guy’ myths, as we checked in within 10 minutes of arriving. (Typical cockney over exuberance)

The organization at the venue was second to none. The arrival was one of wonderment and excitement, supported by a blistering hot day in the making. With the car parked and registration documents in hand, Hackos and The Finisher walked into what could be described as a mini Glastonbury. OK……a really mini Glastonbury but they could tell they were in for an incredible experience with the announcer sharing jokes, stories and ‘shout outs’ to numerous competitors on the PA system. The atmosphere had already started to build.

The mini village that awaited our Spartan peers was one of awe. Undoubtedly how the Persians felt when 10,000 Spartans faced them, not 300. Signing the Death Warrant was enjoyable, particularly when ticking the box that meant that if you died on site, your head could be kept to dissuade other Spartans from taking part……..Of course they ticked that box. Their wives and children would have understood and rejoiced. Once the traditional race numbering of the forehead had been conducted, our Spartans sucked in the atmosphere and viewed the challenges that lay ahead. The numerous obstacles, mud pits, high wire cargo nets and signs exclaiming serious injury or death only added to the anticipation; backed up by the bubbly and friendly people also there to test their mettle on the nettles.

Having ensured that they lined up in the correct area named ‘Wetnecks’ (newbies), as trying to get into another area meant a timed stay in stocks, our Spartans got a good position at the front of the fenced off start. Veterans and Tough Guy regulars were allowed to start slightly further ahead on the hill but everyone started at the same time. 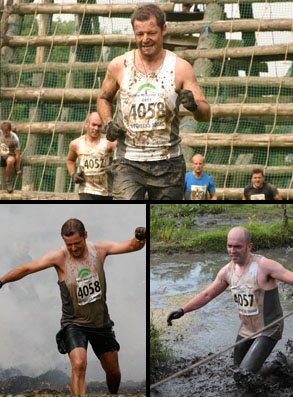 The bellow of a cannon signaled the start and although both Hackos and The Finisher moved confidently through the opened fenced off area, the rest of the fencing was dismantled by other adventurers eager to get going, fencing which nearly put paid to our duo at the start.

It was predicted that a number of miles of running would spread the field out first but instead of miles, there was over nine mud filled trenches in a row, which caused carnage and leg sapping pain after one mile.

Gloves were a necessity to haul your body out of the pits and onwards. The pain was mixed with absolute comedy as fellow runners found themselves face first in mud and drenched to the bone so soon. But likewise, the team ethic of all to help and support was outstanding. Great to feel a hand on your Ass………helping you up, out and forward to the next pit.

The running was good. Long foliage though hindered progress but again testing the level of training indulged in. Series of high vaults and low ones ensured that complacency did not set in. The nettle warrior title was well deserved as most areas encouraged progress through them. However one such mound with a well worn track showed all spectators the mentality of anyone taking part, as a painted red (from head to toe) runner wearing only a pair of trainers and running shorts, ploughed through the middle of the 5Ft high expanse; to a round of applause.

The Slaloms were next. Hackos mistakenly thought a slight zig zag off piste was the infamous slalom until he was met with a series of twelve steep 'No Brains' style ascents. Both Spartans responded well and they insisted that if the tracks had been wider, they would have overtook more people………..however ‘hands on knees’ was the order of the day.

This was followed by the water slaloms. These were basically fourteen pits of energy sapping mud, 15 feet wide and in parts 5ft high to climb out of, which each runner had to haul their body out of onto firm ground. And repeat. The fun really hadn’t started at this point. Proper trail running terrain ensued with cargo nets tight to the ground thrown in for good measure. Both Spartans felt at home here but this became short lived as they then approached 40ft high sky walks which although ‘safe’ were a test of nerve.

(* Please note – as this is written, it is impossible to fully encapsulate all the experiences and events of the day. It was a total blast of the senses and such a fantastic buzz!! )

FOR SPARTA!!! Was the cry as the aquatic section was met. A series of scaffolded grids and cargo nets lying over areas of planks and swings which ‘runners’ must navigate. The first time round was tricky but the second meant a shift in technique where speed could be gained but this was nullified by Persian slowcoaches. The 15Ft Bomb jump followed. A pirate style walk the plank into 5FT of muddy water before swimming to the edge and picking up a log, transporting it through 200m of muddy water.

The Finisher and Hackos did what was asked and were Spartan in their approach to anything thrown at them; even the fire jumping, ducking under water and rope walking above sewer pits. However, the Torture chamber presented an experience, which naivety and ignorance were the best strategy. Enter the bunker with a 15m underwater swim sign and you are suddenly facing numerous logs hanging from the ceiling. The duo were told to lie down low…..but why for logs? The sound of Persian screams added another dimension to the puzzle. This became clear after pushing through the first couple of logs. Wires containing electric shocks were dangling from the ceiling BUT it was too dark to see them. The Finisher received 5 shocks, Hackos also. The charge from what was found out later was a truck battery – shook both Spartans to the core. One Persian in front lost it totally and descended into Hell. The Tiger Tails (as they are now commonly called) appeared three more times in this epic journey; but light allowed our Spartans to avoid them. The running through knee deep mud was a welcome release to the challenges presented to the Delamere Spartans. 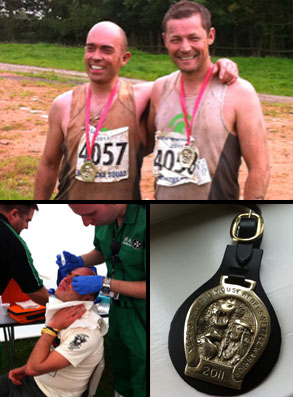 Hackos having his eyeball replaced after a thorough examination. “Its dark…….”
“Worry not…we will fight in the shade!!”

The tyre run towards the end was simplistic and non taxing, however the water induced mud slide down a long bank into a lake, with tiger tails lined across the descent, ensured that the The Finisher roared a Spartan shout of defiance as his coccyx was impaled not once but twice on sharp boulders; a farewell gift from the Nancherrow Tough Guy.

Both Spartans crossed the finish line in 2hrs 36mins 37 secs. Both arms held afloat not in survival but in the sense that we had ‘run hard’ and taken on each and every challenge thrown at them. The Spartan Spirit enduring all pain, even Hackos’ ripped eyeball……….ok it was a scratched eyeball but very painful nonetheless. 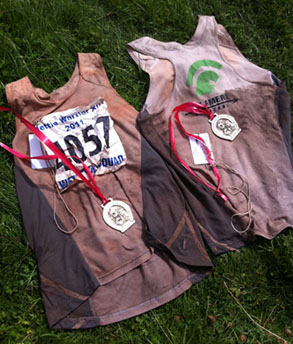 Hackos and The Finisher.
Successfully completed the “Safest Most Dangerous Event in the World” Nancherrow TOUGH GUY July 2011.