I've been meaning to get back into running for a while now. It's been a roller-coaster return from the UTLD, punctuated by highs, lows and bio-mechanical inadequacies.

In any case, after a confident assessment of my current endurance level on the Sandstone Assault, it felt about time to 'test things out' and restore any last lingering lost-mojo before the season's forthcoming challenges require some proper attention.

So there I was, in at the deep end: Anglesey Costal Trail Series (CTS). I've opted for the slacker's marathon distance. There is an ultra option, but that seemed level-up sadistic given my recent low mileage, let's leave that to Nick. We set off around the beautiful coastline, in all it's rocky, rugged, marshy glory where it quickly becomes apparent that I can barely spell Anglesey, let alone run it.

My quads were screaming from an enthusiastic gym session on Wednesday. It's now Saturday and there's still no strength in my legs - one more day and I might have been Superman, but not today. As I worked my way over South Stack, looking out at the rough sea, my jelly-legs made me topple backwards. I felt like a drunk, a liability, so trashed I couldn't even balance. I just about managed to stay on my feet, but all of my usual winter pain points kicked in, tensed and malfunctioned in no coherent order. 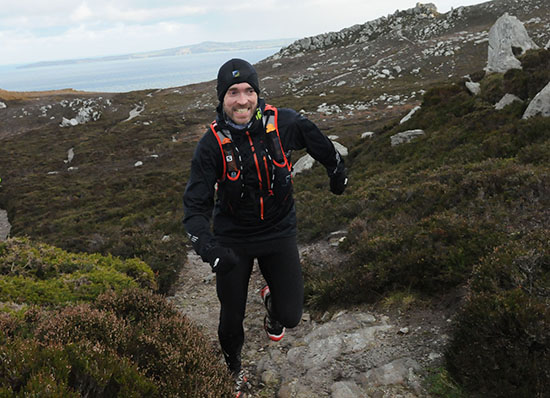 I was thinking of a DNF. This is hell. I never think of DNF! Clearly a few months off and my head has weakened too. At this point it occurred to me that running 19 days straight maybe wasn't such a good idea, and might just have landed me in a spot of bother. I maintain though, the experiment is keeping me looser and helping me to understand some of the gripes I've been having and where they stem from - desk life probably. However, at this stage, I bad no choice but to stop and have a serious word with myself. The pain was preventing me from doing anything properly and I'd only travelled about 2 or 3 miles. I stood still for a few moments and stretched, allowing the pain to subside long enough for my head to return.

Having watched swathes of people pass, it was time to get running again. I reconciled myself with the fact that this was going to be unpleasant - on balance I could hardly drop out, barely having started and with nothing specifically wrong with me. Time to man up, shut up and get on. A trail runner's adventures are often savoured in hindsight anyway.

Battling on, the costal trail continued to unravel like unruly twine along the broad green cliff tops. The initial rocky terrain had gone, replaced by marshy heathers. It was better going now than before and I made up some of the ground I'd lost. My senses were beginning to awaken with the familiar costal sounds and salt air. It didn't feel bitterly cold, even though it was. The sea was rough enough to kick up spray, and in a great team effort, the wind whipped foam over the tall cliff tops. I stored spectacular views in nano-second glances over my right shoulder - a lighthouse surrounded by furious sea rolling into rugged coves. Criminal that so much time is spent staring two feet in front of me. 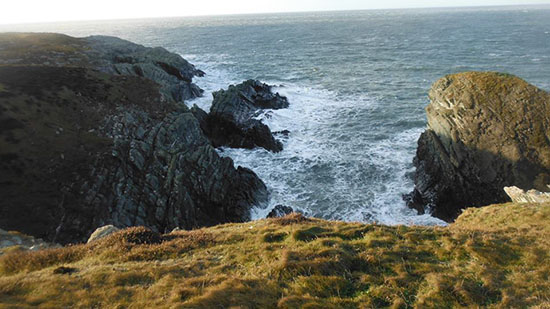 The mid 18 or so miles of the course are mostly undulating, but flat in places. I deduced that my only realistic option for the day was to stride the hills then belt double time down the other side. My legs felt great on the descents. I also found that I could get a great pace going on the flats. The promenades and paved sections feet like a glide, and if I'd had a Cornetto in my hand I'd have been on holiday. I'd gained enough momentum on the flats as to gradually pick off fellow competitors. We started to catch the ultra distance runners as we headed through Trearddur Bay. Every scalp counted now as my confidence started to build. 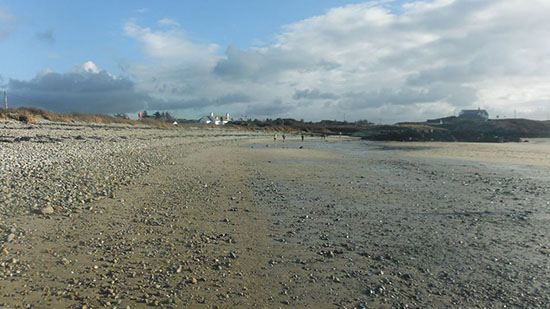 It's almost incomprehensible how long the sea remains on your right side in this race. In my head, stuck on repeat, the word 'Yosemite' (pronounced incorrectly "yosie might"). Why? Tired I s'pose. It was a good sign when we hit a sandy beach check point and the sea stopped being on the right. It was well over halfway when this finally happened, so there must have been some geographical jiggerypokery to get us home. On the way back the wind hit us hard and head on. I bobbed past a dejected looking Paul R.

The headwind was determined to destroy the momentum I'd now gained, but I refused to let it break my spirit. At last I could see the final destination of 'Holyhead Mountain' way in the distance. It was time to attach fisherman's rope to that sucker on the horizon and haul it towards me. We travelled ever nearer and through six or seven miles of swampy, boggy, mostly upwards hard work. A thousand kissing gates and some of the tallest stiles on Earth ensued. Halfers and 10kers were now in the mix. More people to pass, more confidence to build, all adding to my ascending power-up meter.

The climb up Holyhead Mountain was tougher than expected. It's not really a mountain, just a big hill, but it does a good job of pretending to be one. It's steep and rocky with some big boulders for my short legs to contend with. It was no less painful at this point, but I felt more determined than most people looked. I continued to make good ground. The top was marked by a team of mountain rescue folk. That was my signal to let fly. Getting a little reckless and with no thought for H&S, I jumped and bounded down steep rock, past cautious fellow competitors.

Finally an exhilarating descent and aeroplane wings left little in the legs for the final twists and turns. I dibbed in and saw Andy W (8th!) who tells me I've made 11th. Given the bad day at the office, surprised was an understatement! Yet again deprived of a top 10 finish (this time a matter of 42 seconds).

Great race, well organised and great company. Another great day out with the Spartans and a good early season adventure in the bag. Tidy, as they no doubt say in Anglesey.

Thanks Jon Hawker for the photos.