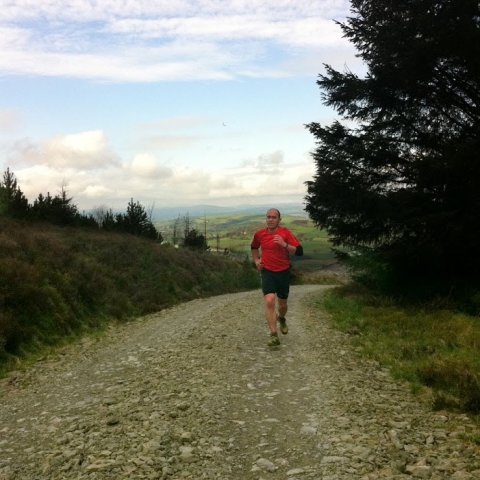 Sweat dripped from the brow as yet another hill approached on the horizon. The smell of fresh Welsh air intermingled with the smell only associated with hard work and perseverance. Each footstep took us closer to the end of our journey, or so we thought…..in fact, a hard, hilly and hot 7 miles was to be the catalyst for what we now know as DELAMERE SPARTANS.

Llandegla…..15th April 2011. A 45 minute drive from Delamere was the venue for the first Delamere Spartans event. The normally MTB filled forest played host to two intrepid and ‘amateur’ trail runners (Hackos and The Finisher); seeking adventure and a good, hard run.

As it turned out, the all terrain brown trail, inspired both willing participants. The shallow, long climb to the top was handled quicker than any MTB’er. A long winding mid section allowed the regaining of breath and the maintaining of a reasonable pace. However, the final two miles unleashed a hilly section, most probably only inhabited by mountain goats and extreme Welsh Fell runners (yes, we met one there!).

The thighs burned, the heart pounded, yet the Spartan Spirit took over and both returned to the MTB Centre exhausted but satisfied that the 7 miles had been done in just over an hour.  The views though, and clean fresh air, had been sensational on the day; breathtaking...

Sweat turned to action: Hackos did what he does best: a logo and a website. Come out to play. "For the sake of Sparta" it said. To this day The Finisher is yet to finish what he started but one day the spiritual son of Sparta will return.

This day was to belong to eight Spartans, met by a well-out-of-comfort-zone Hackos. Tim (our incumbent chairman) made it there first. Ever the good man, he hobbled down to out meet up point, injured but full of praise and well wishes.

On the scene: Wallman an experience ultra runner, there by invitation of Hackos - two acquaintances who had never quite made that run together as planned. Tonight would be the first of many. With Wallman a friend, aka Steve 'The Beast' Mee - a big guy with big aspirations (many of which he has gone on to achieve as a Spartan brother).

The scene was set. The three founding members in place. Time for the cadence of a few to whip up a storm of many...