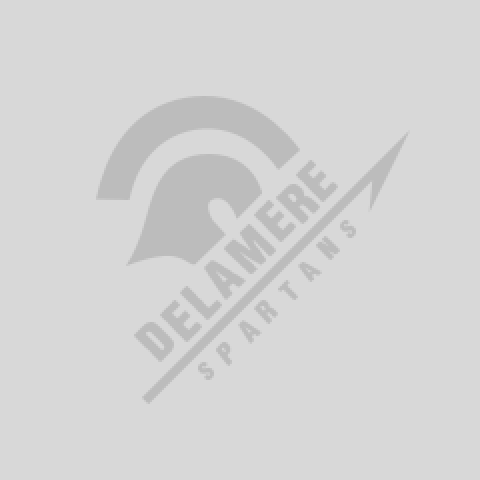 You’re at the edge of an open grassy field.  The objective is to get to the other side which is about 200m away.  Now go.

Dusk ‘til Dawn is a 50 mile race starting/finishing at Hope in the Peak District taking a clockwise loop around Buxton.  You start at dusk and need to finish before dawn or The Grim Sweeper claims your soul.  Medals of different colour are awarded depending on how long you take, going from Black (pitch black) to Bronze (daylight).

There is also a marathon and half marathon at the same time taking in some of the start of the same route.  It’s also hilly, with 2,650m of ascent:

Fellow Spartan Nick drove and we got ourselves to the mandatory kit check.  I race light and had a tough time at check in, coming close to not even starting.  I’d taken the same kit as last year, I guess it just depends on who does the checking. 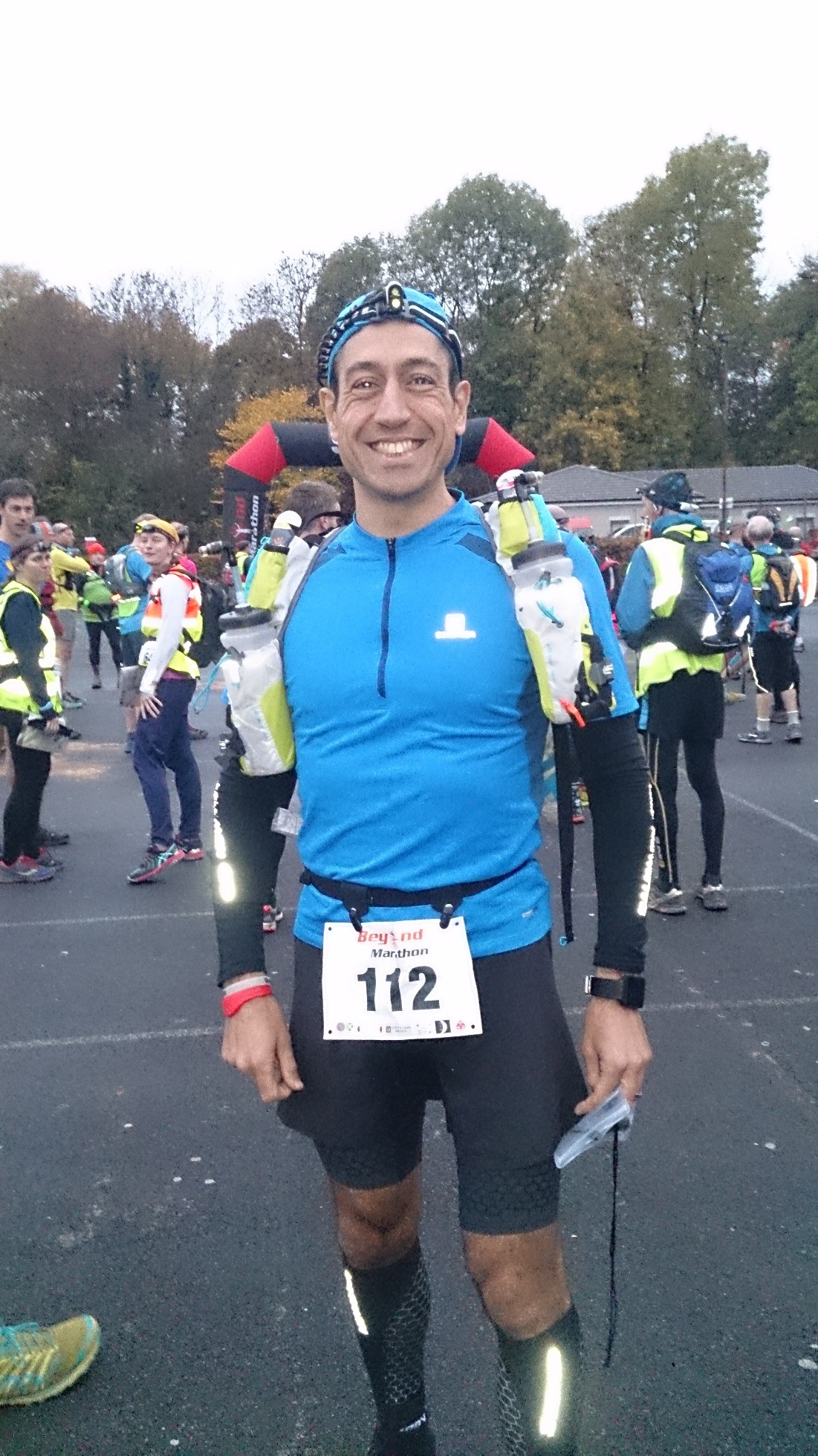 A steady descent where I just let legs carry me down and I caught up with a ½ marathon runner, the sight of headtorches snaking over the hill at night behind me was awesome!

I stopped at the Castleton CP, stuffed my face with sweets and pop ready for the climb up Cave Dale and the long (11 mile) section to the next CP at Miller’s Dale.

Last year Cave Dale was where I hit a low, not this time though as it was ½ way round last year with it starting in Buxton.

I was more prepared and started with my base layer and arm warmers on.  On reaching the top of the Moor it was getting quite foggy and I wasn’t sure if it was drizzle or just the fog that was making the air wet so I pulled on my ultralight Montane top.  I had my OMM jacket but it’s quite thick and I’m sure I would have overheated.  It was really only for an emergency.

One of the things I’ve learned more and more from ultras is how to keep a good body temperature.  I don’t have a high threshold if I get too hot or too cold so I prefer lots of thin layers that I can easily change to get my temperature right.

I checked my phone and saw that I hadn’t started my GPS so turned Strava record on, d’oh!

A pretty fast and uneventful run over the top along farm tracks to the next CP where I’d passed a couple of runners.  Judging by their pace I guess they were ultra runners.  It’s irrelevant anyway as you should only ever run at your own pace.

At the CP I downed a few Colas, flapjacks and stuffed my pouch with Jelly Babies.  Again, it was a fair way to the next CP so I had a stash to nibble on the way.

My pack has two bottles.  I use one for water and electrolites and the other for energy drinks.  I can then swap and change what I want to drink when I like with zero hassle.

I’ve done this race a couple of times before and towards CP3 there is a right turn off the track and across some fields.

By now the fog was pretty bad and my headtorch was useless so I turned it off.  I held my ‘B’ torch in my hand low down and used that instead.  Think of what it’s like driving a car in fog.  The main lights just reflect back into your eyes making visibility difficult.

I got to the road, damn, I’d overshot the turning into the field.  I backtracked and found the turning, there was a route marker there but it was back to front and was only visible if you were coming back up the track like I was.  The entrance was just a crack in the wall, no wonder I’d missed it.

Now I’m at the edge of an open grassy field.  The objective is to get to the other side which is about 200m away.

The problem is that it’s totally pitch black, there is absolutely no light at all, no houses, no streetlights, no cars or moon.  There’s also thick fog which has reduced visibility down to about 3 metres.  With no clear path or markers in the field I just had to have a total guess at getting across it.

I failed.  I ended back at the road. 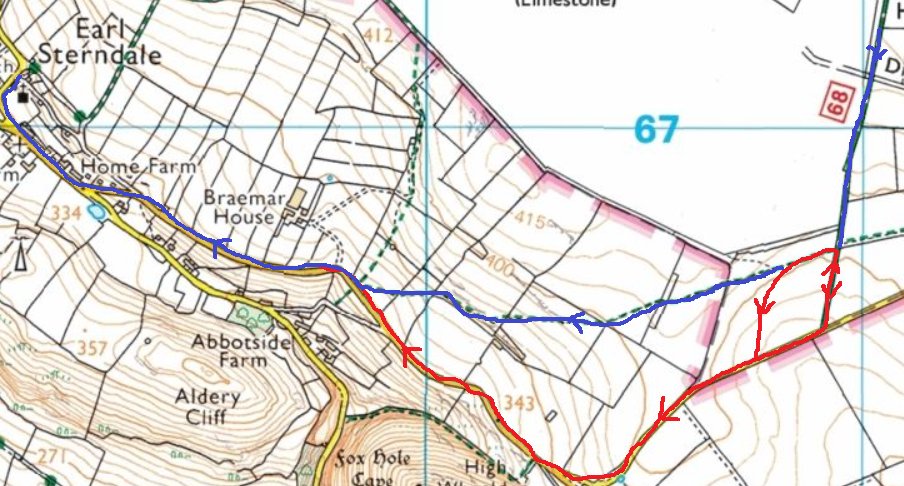 The blue line is the official route.  The red line was my scenic route.

As I hit the road there were about four runners who’d also overshot the entrance to the field and were about 30m away.  I shouted at them to follow me along the road.  They ignored me.

I thought that even though the road was probably longer I could be sure I wouldn’t get lost and waste even more time so I stayed on it to the next CP at Earl Sterndale where our drop bags were.

I changed my main torch, had an energy drink, stuffed my pockets and headed back out.

As I was approaching the climb up through the garden I spotted a head torch ahead, probably about 400m away.

I was feeling pretty good, legs okay, temperature okay and only one mouth puke so far.  Dials all in the green.

Along this section I kept on looking for the torch in front and behind but zippo.  I thought I’d see at least something but then as I got to Buxton and the A53 climb there were two torches in front.  I walked up this slippy incline and caught one of the runners.  He wasn’t happy.  I tried to ask if he was okay but didn’t get much out of him which was probably a good thing as apparently he’d had ‘the runs’ and would then stop at the next CP.

At the CP at Derbyshire Bridge I learned that I was in 2nd place and about ½ way through in about 4 ½ hours.  I thought I should be okay to get under 10 hours.

Climbing up towards the Cat & Fiddle pub the fog was still thick and I wouldn’t see very far.  It was just a case of grinding out the climb up.  At the top you then follow the wide path towards Shining Tor except if you are me and you take a different path away from Shining Tor.

After about 100m the path had almost disappeared and so had I when I went knee deep into a pond.

I thought that if I head left then I could rejoin the main path but I over compensated the turning left and did a little loop: 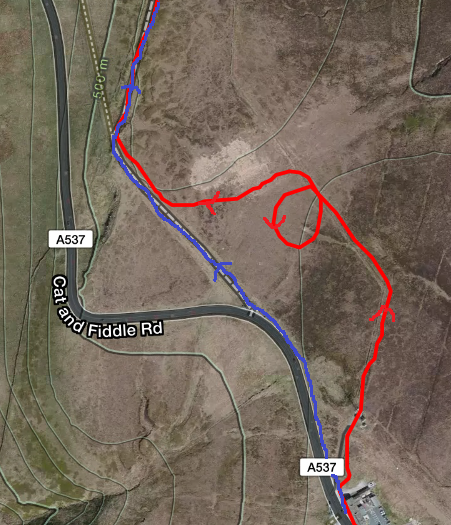 Crossing open fell with near zero visibility falling over in the rutted, uneven and wet heather slowed me down.

Once back on the main path I ground out the climb up and over Shining Tor and the mercilessly dull descent along the slabs and past Windgather Rocks.

I really hated that descent, visibility was very poor, I was still in ‘B’ torch mode and I just couldn’t get any speed up because of it.  But then coming off Taxal edge the fog shifted and the main torch came back on and then time to leg it!

I knew the Taxal section well, it’s on the HP40 route.  I started jogging up the initial road climb to Eccles Pike and it was going okay but then it just got steeper and steeper and I was reduced to walking.  I was happy to accept that as I hadn’t walked anything since just after the drop bag CP.

Once over the steep bit I turned the legs on again and ground out the Eccles Pike climb to the first self clip.

A steep descent led into Chinley where the next CP is.  I thought I’d made a wrong turn but trusted my nav and eventually found it.  Another quick stop and back out.  Stopping for anything more than a couple of minutes and my legs stop working, it’s just best to keep moving.  My phone was now flat and I had no idea how much further it was except from guessing from the map.  I reckoned it was about 13-14 miles.  The lady at the CP said it was 11.5 so not too far.

The next climb over Cracken Edge is a bit of a toughie, you could run it on fresh legs.  There are small mounds on the climb that overall don’t make the climb higher they are just steep and then level off.  There’s a parallel footpath that’s more consistent but shin deep in wet grass.

I was tired by now and took the grassy option which I could run up.  The wet grass was lovely, cooling my feet and brushing against my legs.

When the path levelled out it split, I took the right fork.  Two years ago I took a left fork and ended up right on the top and had to back track which cost me 2nd place.  I was determined to not make the same mistake however I still went wrong.  This fork took me across the badly eroded loose rock that was near impossible to run through.  I tried to press on but it was difficult.  I tried to keep left hoping to rejoin the main path and after 300m or so I did.

Down the steep slippery slope and up a very steep slope to the romantically called ‘Mount Famine’ where the second self clip is.

Now only 9 ‘easy’ miles back to base, I’d run this route loads of times, it’s easy nav and on the HP40 route so what could go wrong?

Well, me, that’s what went wrong.

I got to two gates on the path.  There are no left turns off the path so it must be an entry to a farmers field so I took the right gate.  It kind of went roughly in the right direction but then started going down hill and kept on going down.  This doesn’t feel or look right.  Quick map check – damn, this isn’t right, but if I follow this path then I shouldn’t be too much worse off, better than backtracking.

One thing I neglected though was to look at is those pink lines, the contours, the ones that tell you how much elevation there is.

I had descended quite a way, now check the map to see the way out.  I started on a road and I had to get the compass out.  I was now in panic mode.  I was in 2nd place (or I hoped I still was) and lost.  The compass was either knackered or I wasn’t where I thought I was on the map.  I started off up a path that could take me back up to the route but it was a gamble, I didn’t know if it would.

I had to stop, think and be rational.  I decided to back track and get back onto the road.  There was no fog now so I could see better.  I eventually came across the road to Rushup Edge with signposts – always good so I followed the road.  It was about a mile up the road to the next CP and it was a real drag, I just had to put my head down and grind it out.  I could see across to the route I should have taken and the feint light of headtorches – they may get to the CP ahead of me.  With the extra effort of the distance, climbing and mental panic I wasn’t sure if I could keep the pace up. 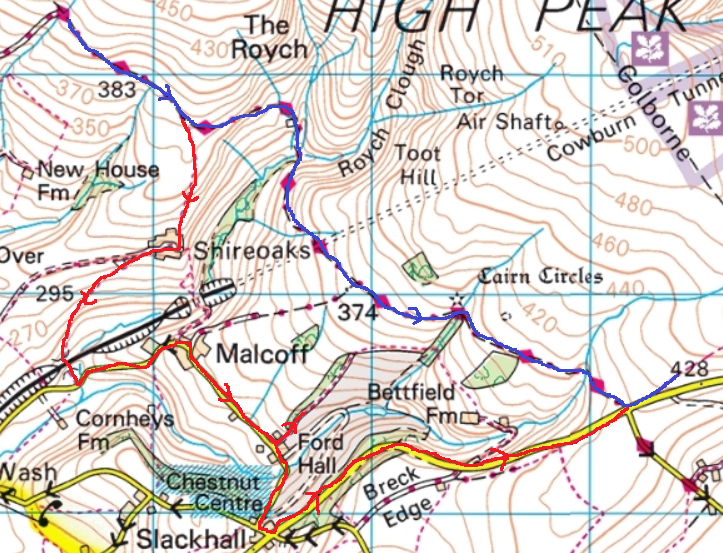 Luckily I got to the last CP at Rushup Edge and was still in 2nd.  They were surprised to see me coming from that direction.  Head down and just slog out the climb up Rushup Edge and then over Mam Tor and into the finish at Hope.

I managed to finish 2nd and get my 3rd black medal in 9:48, just 5 minutes off my PB, not bad considering the fog and bad nav.  http://beyondmarathon.com/dusk-til-dawn/results-2016/