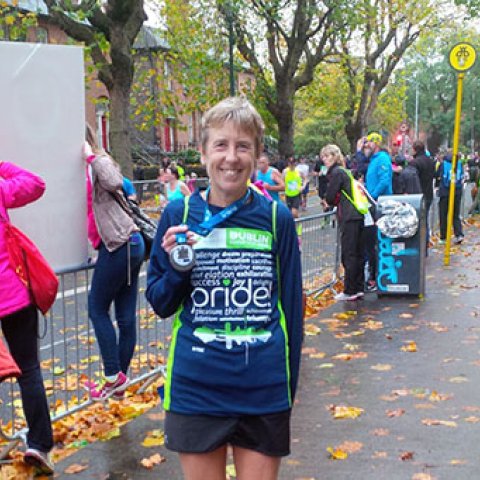 Having had several attempts to break the all elusive sub 4 hour barrier in a marathon and failing I thought a change of tactics was needed. My unsuccessful races were all on pancake flat courses and living in and running around Frodsham I'm a hill loving gal, so, after some research I decided to enter the "undulating" Dublin marathon.

After the best part of 6 months training, 6 days a week, mostly on Tarmac I was on my way to Ireland feeling optimistically confident. Dublin marathon is on their Bank Holiday Monday at the end of October with a 4K breakfast run the day before - Geoff joined me for this and we both thought it was excellent. A gentle trot with about 500 mainly overseas runners carrying their country's flags, a technical t-shirt, a delicious full Irish breakfast worthy of a 4* hotel, an excellent live band while we ate, a display of Irish dancing and an appearance by U2! - all for 15 euros. Race day I woke up and my optimism took a dip - it was a wet and windy Dublin. However, once I put my kit on, my race head returned, Oatabix and banana for breakfast and I was off on the 400 meter walk to the start. A quick baggage drop, queue for the loo and before I knew it we were off, all 13,000 of us.

It was wet. It was windy. The inclines were all in the wrong places but WOW what a marathon, supporters lined the whole route. The organisation was superb and the supporters were fantastic, I've never known a race where so many people had spent their own money and were offering jelly sweets, gels, fruit and drinks to the runners. If you're looking for an Autumn marathon I'd recommend Dublin. Oh, and my time? Sub 4 (3:59:19) Some might say only just but I don't care - my pb for a marathon now starts with a 3.

Now then, after far too long an absence, time to hit those trails.