There and Back Again, 6 Times!!

It's past one o'clock in the morning and I haven't had my supper! Not only that, I am stuck. Trying to find my way across a river I cannot see. It is all that Rangers' fault. But I can't go back without the apple. What would I say? What would he do! 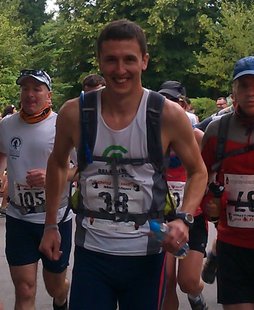 It all started with a request for a travelling companion by one of those long legged Tarporley Rangers " Does anyone fancy entering this with me, either as a pair or small team?" Well I had nothing else to do that weekend, so I suppose it might have been my fault that I found myself travelling over the Snake pass at 7.30 on a Saturday morning of one of the hottest months of the last decade. We dropped down from the Peaks, down into the Hope valley, and the town of Castleton. The location of the Headquarters for the 12 Labours of Hercules was Losehill Hall (nicknamed "Olympus" for the weekend) there we met Richard, Wendy, and the volunteers looking after us during the event (they were all brilliant).

Time for a quick look around this YHA venue to get our bearings, a concise briefing from Richard and then we were called to the start line. Al (the Ranger) had made the plan, with only a small change I insisted upon, I would be doing Labour11(there was to be food there!!) So Alan was ready to start with Labour 2 "The capture of Cerberus"

Before I had seen the contents of the buffet table, the Ranger had returned. Amongest the first three back to Olympus clutching his prize from the Underworld, he thrust the dibber into my hand and I was away. Off to the Pit of the Cretan Bull, 8 miles round trip for Labour 8 (all Labour's mileage matched its number). It was not long before I realised the folly of letting a hobbit loose on his own, barely out of the village and I had lost the path! Quickly I spotted a farmhouse I should have been closer too, I changed my course and upped my pace, and caught sight of another travelling the same route. We travelled together quickly all the way to the pit of the Bull, it was only when the path rose sharply on our return where my short legs and hairy toes could not match his stride. So I bid him good luck and watched him pull away from me, only for me to take a short cut and to meet him again above the Village, and so we returned to Olympus together at a pace quicker than I would have travelled alone.

The quick Labour one "Erymanthean Boar" was next for me, and after putting two arrows in it's flank I handed the baton to the Ranger, and away he flew to tackle Labour 6. This quickly set the tone for the day we both raced each Labour on it's merit, arriving spent, handing on the dibber with no words wasted "that was tough, what number" the fresh runner leaving the spent one to fill in the log sheet, re-fuel, and rest ready for his next labour.

The middle of the day saw us tick off the middle Labours, the Ranger doing 6 and 4, and I did 5 and 3, although the latter had 1.350 feet of ascent to return with the "Cattle of Geyron". It was a delbirity ploy to ensure neither of use got to exposed to the heat of the day, but left us with the longer labours to do.

Alan returned with Hera's favourite girdle to win a spot prize from Labour 9, it was 6.30 in the evening and I was feeling peckish!! I had taken my fill from the excellent buffet table at Olympus, but wanted more. So off to Labour11 "Stymphalian Birds" but it was not my flesh on the menu tonight! I felt I was moving well up the Limestone way, through Cave Dale and another 4 miles to the Labour, and the food! Quickly I completed the task and devoured my reward, before making my Origami bird, and returning back the way I had come. Slipping while descending down Cave Dale, I was gratefull I was not doing this labour in the dark, but it was nearly 9pm and I knew Alan would be needing his headtorch on his long run up the r**d to Labour 12.

I had studied the timesheet before I had departed on Labour 11, and knew we were in with a real chance of finishing in the prizes. I mentioned this to Alan as I arrived back to Olympus, he had also come to the same conclussion. The race was on! I checked the times that people were taking to do Labour 12, grabbed some food, changed my clothes and climbed into my sleeping bag. It was then I heard Richard the organiser on the phone, someone couldn't find a checkpoint. It was Alan. Missing a control point would mean we would be out of the competition!

Alan made good time coming back from the checkpoint, and I was ready to go with a quick "that was a nightmare" Alan hands me the dibber, and I set off. It is getting close to midnight and as I start running towards Hollins Cross with the words of warning from other runners still fresh in my mind. The path down to Labour 10 has proved troublesome to quite a few, and they had gone there in the daylight. Half past midnight and I was on top off Mam Tor, but there is no view to look out upon as the clouds have come down. The light from my headtorch is reflecting of the water vapour, visability is bad. I can jog on the flagstones on the ridge, but the path to Lord's Seat see's me stumbling, twice I fall and am forced to slow to a walk when the trail is rough. I reach the path to head down off the top down to my final Labour the "Apples of Hesperides"

It's past one o'clock in the morning and I havn't had my supper! Not only that, I am stuck. Trying to find my way across a river I cannot see. It is all that Rangers' fault. But I can't go back without the apple. What would I say? What would he do! I have missed the path to the Orchard, just like many others. I have been drawn to the lights of the Farm, I am out of the clouds, and can see the marshy field I have been descending has led me to whitemoor stitch, with it's many streams running down from the ridge into it. I am off the path stuck between these streams I can hear the water, but the ground falls away so steeply I can't make it across to were I think the bridge is. I head across the next stream, the grass is knee high and I can't see my footing, I slip my foot landing in the water I could not see.

Right it is to steep to go heading up to find a path people missed in the daylight, so with wet feet already, how deep is this river? I head down, slipping down to the water's edge and across, not to deep. Now to climb the bank, holy cow!! it's steeper than the railway! and where's the top! The dark playing so many tricks with my already tired mind, I scramble up. Now where is that dib point, "reflective tape" he said. My headtorch picks up a reflection, I start off in the direction of the returning light only to find a group of sheep huddled against the wall!

I stop. Take a swig from my bottle, and gather my thoughts, check the map, find the checkpoint, and start heading back. Crossing the river by the bridge I find the path, I have to keep looking at it as it is only a small path. Hands on knees I start heading upwards, I see two more headtorches coming down they have missed the path as well! Concious of how much time I have lost I try to make the best time I can heading back, again I stumble and hit the ground hard. Making the best time I can, i get to Hollins Cross and the cloud has lifted. I make the best time I can down from the top and run non-stop back to "Olympus" hoping not to have blown the lead we thought we had, only for Alan to tell me his story......