The Sandstone Trail Challenge: A Tale of Achievement and Discovery

I was never a runner, in fact I hated running. Walking into the Helsby High School changing rooms and being told by the P.E teachers we were doing the double loop was my idea of hell. I recently mapped the route and found it is a measly 1.9 miles long, which looks pathetic considering recent achievements.

Fast forward a few years and a few friends convinced me to enter Hellrunner 2011, which meant I had to get training. Just before the race I managed to get up Old Pale only stopping once and I thought I was amazing. The race itself nearly killed me and I was so broken I had to take the day off work due to not being able to walk and I needed physio treatment on a knee injury. I was tempted to stop running all together after that, but then I joined the Spartans.

17 months after joining the Spartans and without ever having completed a marathon, I entered, completed and smashed my way through my first Ultra Marathon. This blog will hopefully bring together everything I experienced on that day. 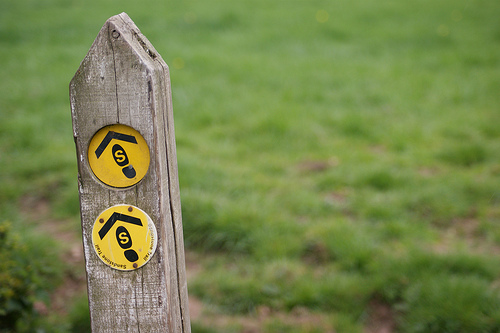 The location is Whitchurch and the task being faced by the 200 people who entered is the Sandstone Trail Challenge. 33 miles, 3000+ foot of ascent and a cut off time of 12 hours. First of all I need to mention that there were over 20 Spartans on the start line, over 10% of the entire field. This just shows what a crazy bunch of people we truly are. My aim for the race was simple. Finish. I had never run beyond 21 miles before so to simply finish would be an achievement, although in the back of my mind I hoped to make it home in under 7 hours.

Before I continue with my little story, I should point out the preparation I made going into the race. I had read far too many articles and put too much information into my brain but the bits of information I did pick up on that I thought might be useful were:

With the whole psychology thing ringing in my ears and the advice of many more experienced runners absorbed, I made two changes to my strategy for this race. The first being to change my Garmin watch from miles to kilometres, with the idea being I would not be ruled by pace (although I could do the maths if I wanted to). The only value I needed to know was 5 min/km = 8 min/mi which would be the value I would be intending to not dip under during the first few miles for fear of burning out later on. The second change was to break the race down into 10km sections, this roughly worked out as the distance between checkpoints.

So the race, I will try and keep this as short as possible…..

Start – CP1: I tried so hard to not run fast at the start, admittedly I was probably in the top 30 going along the canal I was cruising and maintaining a pace slower than my usual average. Job well done. I cruised through this section with the only point of note being the boggy field we had previously been warned about. Being a Spartan, I did not care about mud and I was just going to plough straight through the middle, until I saw someone nearly face plant in the mud. The psychology kicks in and realising I had over a marathon to do, I did not want to be soaked so a more conservative approach was adapted.

CP1 – CP2 – I hit the Spartan checkpoint and although I wanted to stand and chat, I felt good and I knew this was my “easy” section and I wanted to crack on. Just as I hit the hills I spotted my first Spartan vest since the start. It was Jason. Jason was adapting the same philosophy as me for walking the steep hills so we attacked these hills together. It felt good to have someone doing the same thing as me and it probably stopped me from pushing too hard too early. Our tactics were definitely justified as we were passed by people determined to run the hills only for us to catch and overtake them on the flats as they died. CP2 was reached and I was feeling good. Time for some jelly babies and to push on.

CP2 – CP3: More climbing, but with the company of Jason and his friend Neil it did not feel as bad as it could have been. In what seemed like no time at all Jason was pointing out the top the hill and the highest point of the course. The views were fantastic and I felt great. I took on a few more jelly babies and started to think ahead to Rock Farm and that Mars bar I was saving. Jason warned me about doing this and it came back to haunt me later on. After reaching the peak I started to pull away from Jason, I felt bad leaving him behind as he had been good company but I wanted to push on. Checkpoint reached, water taken on and a couple of bourbons consumed, I was off again. CP3 – CP4: I was finally in territory I knew, good in ways, bad in others. I don’t usually run with music, I love being out in nature but just for today I had brought my ipod for this very section. I knew it would be tough and wanted something to take my mind off things. Unfortunately this is the moment the heavens decided to open, so the jacket came out, the headphones put away. Head down and time to push on. I started to get a bit of knee pain about this time so I pulled out the ibuprofen for some pain relief. I reached Rock Farm still feeling good and before I got to eat my Mars Bar I had to phone the parents, they were meeting me at Summertrees and I was ahead of schedule. The Mars Bar was the biggest disappointment of my life and I had to force myself to eat it, I knew I needed the carbs to keep me going. There was a considerable group of us close together as we eased towards the next checkpoint where stomach cramps started to kick in. That so***ng Mars Bar was coming back to bite me bad.

CP4 – CP5: Checkpoint 4 was actually earlier than I thought so even though I needed some food I left in a hurry, I knew if I got to the top of Willington I would meet my parents with some much needed supplies. Halfway up, I was caught by Nic Kingsley. He cursed at me because I was only hurting in my knee and stomach and then pushed on ahead with words of encouragement. I reached Summertrees and supplies! I ditched the pesky bladder, which had been the most annoying thing about the whole run and took on two isotonic drinks and plenty of gels. I only stopped for a minute but the words of encouragement from my parents gave me such a lift. I left feeling 100 times better (probably helped by the isotonic drink). Primrose Wood and then Delamere whizzed by and I felt amazing, the feeling only got better when I met a load of Spartans at BBG. Crossing the road, I needed a short detour for a well needed toilet break and then back onto the SST and the push towards Manley.

CP5 – Finish: Just before I reached CP5 I met a guy called Max who kept me company for a while. He had done the event previously in just over 6 hours. Surely I wasn’t on for that time? Again the checkpoint was a short pit stop. I knew there wasn’t long to go. I pushed on knowing there was a flat section on the road to come, looking at my watch I was still managing 8-9 minute miles. How? I don’t know! My legs were in pain now but I just kept going. Reaching the next field section I phoned Sarah and told her I was an hour away. She was shocked, I was well ahead of schedule. After the phone call possibly the hardest section for me, just because of the hail that battered my face across quite a few fields. Reaching the climb up Frodsham hill I was glad for the shelter. Halfway up I saw Steve Mee and Paul Atherton up ahead. Something must be up, they should be miles ahead. Turns out Steve had been ill for weeks and Paul could not keep food down. Even though they looked like death they still gave me words of encouragement and told me to push on as I was on for a time under 6 hours. I simply thought their illness has made them delirious. I reached the top of the hill and time for some finishing music, something with a ridiculous high tempo. I started to fly down the hill and once I hit St Lawrence Church I was in full flow. Bounding across the road ahead of a clearly broken Spartan Alex, it was head down sprint to the finish.

I had done it, 5 hours 49 minutes. A full 71 minutes faster than I had hoped to complete it. I had expected cheering to greet me home but no one was there. I got on the phone to Sarah to find out where she was. It turns out I finished too quickly! Ooops!

Everyone kept saying to finish an ultra is the best feeling ever. I didn’t believe them until I did it. I felt invincible. I wanted to keep on going. It is a feeling that is still going strong.

I definitely could not have done it without the support of everyone though, there is nothing better than cheer or a stranger clapping you as you run past. The organisation of the event made my first ultra an amazing experience and now I am addicted. Next run? The Gritstone Trail!